No matter where you live in Washington, you should be able to access the booming nightlife of the state. Why should the old and boring prevent the youth of Washington from living up their lives in Seattle? It’s not like abstaining from fun ever made your life more enjoyable, so why not embrace the night?

Buy a Scannable fake Washington ID from IDTop to to dance until you collapse in bars like the Emerald City Soul Club.

There are currently two types of IDs in use in the state of Washington– The regular ID, and the Enhanced ID. The Enhanced ID was created for Washington residents so they can use it at TSA checkpoints. They can also use it to exit the US and go to Canada and Mexico. You cannot do this with the regular ID. We sell both types of IDs. However, don’t try to cross the border with a fake ID.

We use multiple shades of blue to match the official ID– The card’s background uses four blue shades, three orange shades, and features blue and grey line webbing covering its white surface. Each blue is unique, but shoddy IDs will try to use the same blue throughout the card. But we have the proper inking software required to replicate every unique shade of color on the ID.

The Washington State Seal in printed on the back – If you are being checked by a bartender who has an eye for details, then you will want to have the back of your card look as valid as possible. The state seal on the back is printed in bright neon yellow ink that is supposed to shine gold under blacklight. These seals replicate the image of George Washington with the state letters circling his bust.

Underneath the blue header, you can faintly see the Washington state seals printed underneath a section of text. Unlike the state seals on the back of the card, these are printed with UV ink and are slightly grey. If the person checking your card is using a blacklight, replicating these images correctly will allow you to pass the inspection.

The foil printed pinecone tree at the bottom of the card – Foil printing is a UV printing technique that adds extra security to state IDs. This type of printing requires UV ink and adds a foil layer on top of it. This printing method makes creating fake IDs more expensive and less profitable, but we can replicate this type of UV printing while keeping our prices low.

Blue and orange waves layered on top of the ghost image – On top of your full-color ghost image in the right-hand corner of the card are orange and blue waves. These colored waves expand above the image and to the edge of the card. Also, the orange coloring is a different pattern from the UV image on the photo.

This ID has a blue and white striped header – Most IDs have a solid header at the top of the card, but if you look closely, you’ll see that this header is actually striped with blue and white lines. The lines are small, but the blue bottom line is much thicker than the others.

If dance halls aren’t your thing, then next time you are in Bellingham, check out the best bar in the city, which is The Underground! But never use your IDs at venues with scanners, or your night might end before it even begins.

Since there has been a rise in the number of fake ID arrests, bartenders, bouncers, and liquor store clerks are taking classes to learn how to spot a fake ID. There are a few features that you need to learn about yourself so you can see if you’re getting a high-quality ID or not.

What are Washington Laws Regarding Fake IDs?

There has been a rise in arrests involving possession of a fake ID by minors and adults under 21. In response, Washington state has increased police presence in areas where counterfeit IDs are known to appear, like nightclubs, raves, and underground bars.

Bartenders and bouncers that operate in the state of Washington are not allowed to take your ID or damage it in any way. If they find someone who has a fake ID, they have to call the local law enforcement, and they will confiscate the ID. They are not even allowed to detain you until the cops arrive, so you have a good chance of leaving, with or without your card. But they can take your picture from the security camera and give it to the police.

The state of Washington charges those who are found guilty of having a fake ID with a misdemeanor. They don’t have to use their fake ID to be arrested. Just possessing it is a crime.

If there are other charges that you are guilty of besides having a fake ID, your penalty can increase both jail time and fines.

Ordered 2 IDs for with a discount code. I like the interface of IDTOP it is easy to use and fast. 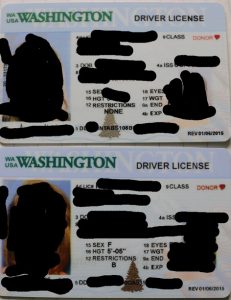 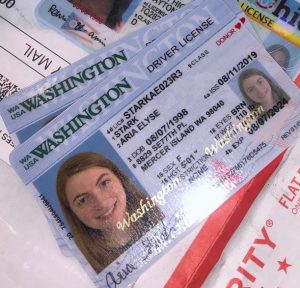 Be the first to review “Washington Fake ID” Cancel reply