Finding the party scene in Connecticut is harder than in other states, but you can discover it if you look hard. Besides, you shouldn’t spend your youth at home under the watchful eye of your parents or guardians just because you don’t live in New York or California

Buy a Scannable fake Connecticut ID from IDTop to keep yourself warm in the cold CT nights at home or on the dance floor. The choice is up to you.

If you want to purchase an older ID or driver’s license, we still have the designs to make them. Otherwise, the new Real ID for both driver’s licenses and ID cards is the default purchasing option.

No Magnetic Stripe– Unlike the old ID and license, the new Real ID versions do not have a magnetic strip on the back of the card. Instead, the state has decided to use 1D and 2D barcodes, which are supposed to be more secure. We include these barcodes and make them scannable so our IDs can pass scan tests.

UV RIBBONS– When you place our cards under UV light, you will see that there are ribbon-like designs around the top and left side of the card. These designs have no distinct shape, just flowy and long. One ribbon goes over the photo ID while the other goes over the airplane and date text.

HEADER AS CONNECTICUT NAME- On the driver’s license, the word Connecticut is located on the top left-hand corner of the card and is not placed in a colored header. The state’s name is colored in blue, and it is the same blue used for the header that contains the words “Driver’s license.” ID creators mustn’t mix up the placement of “Connecticut” and “Driver’s license” when printing out the card.

Perforated Dotted Whale outline – On the back left side of the ID card, there is a dotted outline of a whale. Although it is quite small, this outline is not a UV image. Forgetting to print this tiny dotted whale might not keep you from getting into a bar, but we pride ourselves on creating practically perfect ID replicas that never skip a single detail.

State shape to the right of the ID photo – There is a Connecticut-shape outline to the right of the ID photo, and it contains the letters DL within it. The outline and letters are both black, and it is not meant to be seen with UV light, just natural light. This detail does not appear if you purchase the identification card because it is only printed on the Connecticut driver’s license.

The best city to help you forget all your troubles is New Haven. Packed with places to drink, this city is home to over 30 clubs that range from dirt cheap to expensive.

When you’re famished after dancing for hours on end, you should know that New Haven has its own signature style of pizza, a thin crust with fresh sauce, which is served in many places, including the nightclub BAR.

The ID number is not calculated correctly.

As mentioned above, the first two digits of the Connecticut ID and driver’s license are calculated numbers, not random ones. If a card maker doesn’t know this detail, they will generate a random number and use it on the card. Checking the first two digits against the DOB is the most common way to find out if a card is fake, and is used often by the Connecticut police.

The whale and airplane are not outlined in UV ink.

Since the whale and airplane are printed images, their UV outlines are sometimes forgotten by card makers. While forgetting this detail may keep you from getting into clubs, if you’re at the liquor store, you should be fine.

The card comes with a magnetic strip on the back.

Id makers that buy cards pre-made with the magnetic strip can run into trouble if they need to print a Connecticut ID because there is no magnetic strip in the design. Instead, there are two barcodes at the top of the card where the strip would go. The people who accidentally use  Connecticut ID cards with magnetic stripes are usually from out of state.

What are Connecticut Laws Regarding Fake IDs?

Unlike other states, where possessing a fake ID is a misdemeanor at most, in Connecticut, you can be charged with a felony. Those who possess fake IDs can also be charged with forgery in the second degree. If you don’t get jail time, you will at least be given a $5,000 fine.

With such strict penalties, the governor and heads of police in some cities are warning University and high school students that having a fake ID to buy alcohol is just not worth the consequences.

But students and minors keep purchasing fake IDs, so it is up to bars and clubs to monitor who is coming into their establishments. Many places that serve alcohol have started buying scanning machines that can quickly find out if an ID is valid or not. Bouncers and bartenders no longer have to figure out if a detail looks strange or off. They can just feed the card into the machine and get their answer right away.

Also, it is up to the venue itself if they want to confiscate fake IDs or give them back. Some places do not confiscate IDs, and they will not be punished for returning the fake card to the minor.

Since Connecticut is close to many states, many venues that serve alcohol are also untrusting of young people with licenses from New York, New Hampshire, New Jersey, Maine, and Rhode Island.

If a student from Connecticut is caught with a fake ID, the law allows schools and Universities to take disciplinary actions against them if they wish to do so. They can be suspended, expelled, or their entry to the school can be denied.

Part of a group order I didn’t expect a free Connecticut duplicate of my ID. This was just icing on the top. 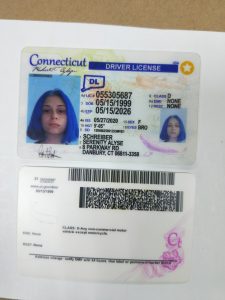 Allison HunterDanbury, CT.
Received my CT ID on Sep 16th and the whole process was too easy. They let me use Visa Vanilla Gift card for payment. Many Thanks. 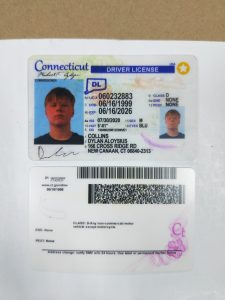 Be the first to review “Connecticut Fake ID” Cancel reply