Nightlife takes many forms in Missouri: in state fairs, basketball games, tailgating parties, and house parties, or the lounges of the bigger cities. It is also a state that loves to drink, so fake IDs are everywhere.

Buy a Scannable fake Missouri ID from IDTop & start rolling deep in beers and cocktails by 12am.

GUILLOCHE– As part of the background design, there are a number of Multi-layer Guilloche lacing lines that run throughout the front of the card. The colors for the lacing are gold, blue, red, and yellow. You can even see the lacing underneath the full photo ID.

Missouri Header –There is the word Missouri in dark red text at the top of the Missouri driver’s license and Identification Cards. This is the header, and underneath the state’s name is a small line underlining it. Based on the background design, the header sits firmly on top of the Capitol building.

Next to the full ID photo, there are the driver’s license numbers. Missouri’s number has nine digits and one letter at the beginning of the sequence. Unlike other State numbers, The letter in the identification number is not linked to the card holder’s first or last name.

MISSOURI STATE SEAL MICROPRINTING – On the front right side of the Missouri cards, there is a state seal printed that is not part of the background. This state seal is printed in a holographic overlay and located directly above the ghost image. The holographic color is light yellow gold.

Multi-Image and color background – The newest security feature for Missouri’s cards is the intricate background that is featured on all state-issued identifications cards. On the back of the cards, there are several images, including a state seal, a city skyline, and a state capitol building.

Black outline of the state – At the back of the Missouri identification and driver’s license, there is an image of the shape of Missouri map all in black. The double-laser engraved “MO” is also visible on the back & front in dark light. This design is to the top left of the card. It is next to be 1D and 2D barcodes. All of the text below the black image is also black and bolded.

Fake IDs from IDTOP.IS are the most popular cards in Kansas City, as they allow college students to drink in the best bars and nightclubs in the city.

The best nightclub to use our fake IDs at is Howl at the Moon Bar, which exclusively features live music from all around the nation and has an entire menu of their own specially made drinks.

How to spot a fake Missouri ID

The photo of the cardholder has red eyes from a flash

Many people who have fake IDs are caught because their photo ID on the card shows red eyes from the camera’s flash. State-issued IDs are not supposed to have this feature.

If photographers for the state have red eyes in their picture, the picture will be rejected before it is ever printed on a card.

The photo ID will be thicker than the rest of the card.

When a non-state issued card maker creates ID cards, they have to place down the full photo image. Many times these photos are sick and do not lie flat on the body of the card.

If it is adequately laminated, people can drag their fingertips across the ID, and it will snag, which shows that the card is fake.

The font is not sharp

Depending on the printer, the fuzzy or unfocused text is a common problem in poorly made cards. The state issued text needs to be sharp and in focus.

One of the reasons ink from text print becomes unfocused is during the lamination process when the ink smudges when the plastic is smoothed over it.

What are Missouri Laws Regarding Fake IDs?

Even though the age to legally drink is 21, most people in Missouri feel that this is a guideline more than a hard rule. Bartenders and bouncers tend not to card people unless they look extremely young, around 16. Even most parents and guardians don’t mind younger people drinking.

People from different parts of Missouri trade information on which bars are loose with fake cards and which ones are stringent. While some bars are so strict that they have ID scanners to find fake IDs, there are many places where, if your fake ID is found, you can slip the bouncer $20, and they will allow you inside.

In the smaller towns where everyone is friends with everyone else, don’t expect to be carded at all, even if the town knows that you’re not 21 yet.

However, this type of attitude toward underage drinking is why Missouri has three times the amount of DUIs than the rest of the nation. So if you have a fake ID and plan to drink alcohol, make sure you don’t take your car. Have someone pick you up.

I have used IDTOP counterfeit IDs over the years. Missouri is one of their top fake IDs which has scannable features. 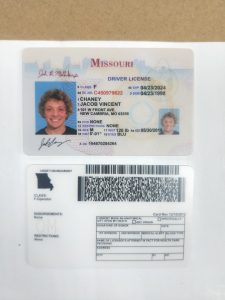 Jacob NathanOzark, MO.
Holograms, UV, bend test or backlit; you try anything & it works like a real DMV license. I am satisfied with my purchase. 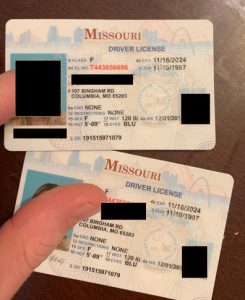 Be the first to review “Missouri Fake ID” Cancel reply