Many people all over the US believe that nothing ever happens in Maine, but the nightlife in this state is just hidden away, waiting to be discovered by those looking for fun. Residents say that the best cities for wild clubs and packed bars are either Portland or Rockland, and both of these cities are located near the beach.

Buy a Scannable fake Maine ID from IDTop & start your night in Portland the right way and prepare to be out until dawn.

We are currently selling the Real ID version of the Maine Driver’s License and Identification Card.

TEXTURE OF THE MAINE DRIVER’S LICENSE – If you read the identification text on the front of the Maine driver’s license, you will see that the standard text is in blue while the text with the information of the person is in black. Also, the black identification text is slightly larger than the standard text. Incorrect text size helps bartenders find fake IDs, so this detail must be printed correctly.

The real ID is shaped like the state – At the top right corner of the Maine ID, there is a gold picture of the state of Maine with a white star inside it. This is the symbol that shows this card is a Real ID card. Many other states have this symbol as a circle, but not Maine.

Holographic text of the word MAINE – There is a holographic text that says the word Maine on the front of the card. To see it, you must angle the card a certain way. The hologram should be visible to the naked eye.

Placing the front of the card under black light will reveal that there is a large outline of the state of Maine that follows the state’s shape on the background. Within the state’s outline is the text “DIRIGO” as a banner. There is also a large and detailed tree above the text.

Intricately colored background on the Maine ID and Driver’s license – There are many images that create Maine’s background picture, and every part of the background has a different color. The images include a lighthouse, a river, a large picture of Maine, a barn, a field, and more. The coloring is light, so it will be obvious to id checkers if a fake id’s color is darker.

1D and 2D barcodes printed on the back.– Both the 1D and 2D barcodes are printed on the back of the main realities. They can be scanned and will pass any ID scanner. When the barcodes are scanned, the information on the card will be displayed. In the right-hand bottom corner of the ID cards, there is the ghost image of the photo ID. The image is in full-color, and it has a blue background. You can see the background coming through the ghost images, so it is transparent.

Laser Printed & Holographic Pine Trees – There are three pine trees that are printed in holographic ink on the front of the Maine driver’s license and ID. One is on top of the full photo id, and the other is above the ghost image. Two of the trees are green while the other is silver.

Whichever city you choose, you will be able to experience the hidden entertainment and nightlife that the state of Maine has to offer, like historical breweries and old fashioned bars that have existed since around the turn of the 1900s.

How to spot a fake Maine ID

The holographic images are not colored correctly.

The holographic trees on the front of the card are not the same color. One is silver, while the other two are green. Coloring the trees the same color is a big mistake lesser fake id card companies make. Or they could forget to print the trees completely.

The colors on the background are off

The background also uses a lot of white in its design, so there is no part that is completely solid and one color. There are several blues, two shades of green, orange, white, red, and brown. Not correctly printing these colors will make the entire card look off.

The person cannot repeat their address.

This is a common method id checkers are taught to use if they suspect someone has a fake id. Not being able to repeat the address on the card will reveal that the card is a fake. So make sure to use a real address that you know when making your card or memorize the new address, so you don’t get caught.

What are Maine Laws Regarding Fake IDs?

If you live in Maine and want to buy a fake ID, then it has to be the best one available on the market because this state does not play when it comes to detecting fake IDs. In 2018, The Maine bureau of alcoholic beverages and lottery partnered with an app called Age ID.

It uses the database of driver licenses and identification cards in the US to search if an ID card is real or not. Unlike other apps that detect fake ID cards, this app does not require a scanner to be attached to a smartphone. Instead, it uses the smartphone’s camera to scan the barcode on the back of the card.

Scannable fake IDs would be able to fool this app if it did not also research through the national ID database. But, it does, and every fake card that is tested by the app is found. In a test of 1,000 fake ID cards, all 1000 cards were detected as fake.

However, this app is not yet used in many places because it is another cost for a business. The state does not provide a fee. Instead, businesses that wish to use it must enter into a subscription with the company that created it, Intellicheck. The government is also forcing places that received an infraction by selling alcohol to minors to use it.

So if you find out which stores and establishments use this app, you can skip them and go somewhere else. If you are found using a fake ID, the person checking the ID is not allowed to keep it. They must call the police the moment your ID is revealed as a fake.

I tried counterfeit Maine IDs from IDGOD & many other vendors. IDTOP’s quality stands out because it scans & has a working UV function. 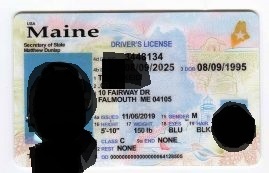 Shelby Dunphy-DayPortland, ME.
They generated a real Maine address for my license. Included a good issue date to match with my DOB. IDTOP is as legit as it gets. 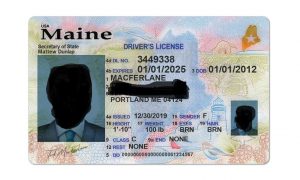 Be the first to review “Maine Fake ID” Cancel reply