Minnesotans love to get together, dance and drink, and they do so mostly at state fairs. These fairs are massive, and they are where the entire town or city comes together, shops, eats, drinks, ride fair rides, and stays out until the late night.

Buy a Scannable fake Minnesota ID from IDTop & enter the world of beer gardens for non-stop beer and whiskey tasting.

UV print of state and spiral – On the front side of the driver’s license, there is a UV print of the state of Minnesota, a large spiral that crosses the whole card, and the state seal. The state has a series of lines within it, and the state seal is wedged between the state map and the spiral. These UV images are layered on top of the entire card.

Walleye Fish – On the front of the card is a walleye fish, and it is there now because it is a new security measure. The fish can only be seen if you place a light behind the card. This is an embossed feature, and we have the technology in order to make this design.

In the top left corner of our Minnesota fake driver’s license is the letter m. There is a partial n sticking out behind the m. The m is colored in blue while the n is green. These letters are placed to the right of the “Minnesota” state header.

A complex and intricate design – Holograms of “The North State” & on the front of the Minnesota driver’s license is an extremely complex design of a river and a forest. The river is made with lines while the forest is made with a series of dots and stenciled trees. Our company takes extra care when creating detailed backgrounds like this, so they are perfect replicas of the real IDs.

The background design is seen through the ID photo – The ID photo to the left on the front is in full color with a blue background. If you view the card closely, you can see the forest design end through the photo ID. The photo is not a full solid image, and neither is the ghost image on the right.

Polycarbonate & iconic landscapes – State-issued Minnesota IDs are made with a polycarbonate body, so we use the same type of material as well. By using the same card, we can ensure that the weight, the field, and the size is exactly the same as the real ID. There will also be no problems when the barcode is scanned. If you flip over the driver’s license, there is a lake and sunset design on the bottom half of the car. In the image, there is a lake, a mountain, a forest, the sun, and two men paddling in a canoe. Below the design is a 1D barcode.

Minneapolis is the most populated city in the state, and it never disappoints its visitors. One of the best restaurants you can go to during the day is Psycho Suzi’s Motor Lounge which is a tiki and Hawaiian themed restaurant that serves amazing food and has a whole menu of daiquiris and mixed drinks.

How to spot a fake Minnesota ID

Minnesota is a common word to misspell, even for Americans and state residents. Although computers create all of the details in fake IDs, the ones that are poorly made will still have the state’s name misspelled. So when a fake ID of this state is produced, the ID maker has to make sure the state’s name is correctly spelled.

The background of the Minnesota driver’s license is very detailed and has many different features. There are dots, lines, stencil, different shades of pink, and wait. If a designer of fake IDs is not detail-oriented, they can easily mess up the background, and it will look quite fake.

The ID number is missing the letter

Unlike past Minnesota IDs, the current identification number is actually 12 digits now. Along with the extra digits at the front of the numbers, there is a letter. That letter has to be the first letter of the card holder’s first name. Many times, the letter is either a random letter or it is forgotten completely.

What are Minnesota Laws Regarding Fake IDs?

Minnesota has a massive drinking and binge drinking epidemic, and it is now spreading to more high school and college students. But bartenders and bouncers are not taking the situation seriously and allowing minors and underaged adults into bars and clubs even with IDs that are poorly made.

Some smaller cities and towns are more serious about minors and fake IDs, but in the larger cities, like Saint Paul and Minneapolis, the alcohol flows wherever the young go.

It is so bad that in Grand Forks, Minnesota, the police have started to check every person’s ID when they browse the party section of the city. And now, there is a program called the Responsible Server training, which all servers must go through in order to work in the restaurant and bar business. It teaches the servers how to spot fake IDs and how people who have fake IDs act. Although, if a person with a fake ID is found, very rarely are they taken into custody and charged with a fake ID. Anyone who is allowed to serve alcohol is also allowed to confiscate a fake id.

Policemen in Grand Rapids are also stationed inside more popular bars and clubs at the permission of the owner. They’re usually in plain clothes or pretend to act as another bouncer.

IDTop’s Minnesota ID works instate. The microprinting is elite. It works under blacklight scanning as well. 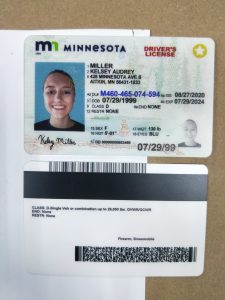 Kelly MicheSaint Paul, MN.
I have used multiple state licenses from IDTOP. Minnesota is one of their premium ID. I received mine in just 3 days and already tested under several apps. 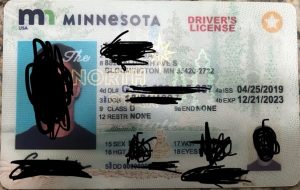 Be the first to review “Minnesota Fake ID” Cancel reply