If you want to party until you can no longer stand, you need to get to Little Rock. But once you arrive, you should skip the museums and head to the clubs.

Buy a Scannable fake Arkansas ID from IDTop & hear music in the air as day turns into night. Follow whatever sound you hear to discover a wild and enjoyable time.

The Large Blue State seal to the right of the card – The state seal is positioned prominently on the right side of the card. If you look closely, you’ll see an image of several blue shades, not just one shade. The ghost photo overlaps it and has a unique shade of blue that doesn’t match the state seal. Choosing to reuse blue shades where they shouldn’t go removes the subtleties of the picture. It can make the seal look flat while the ghost image will blend into its color. We make sure to use every blue shade available, so our cards can stand up to professional scrutiny.

UV outlines of Arkansas – You will see fourteen tiny outlines of Arkansas appear when you place the card underneath a black light. These UV images are the key to discovering if a card is fake or not. This is a crucial detail that even great ID makers forget about since the pictures are small. But we take steps to ensure all of the UV state outlines are present and in the right position.

Special Arkansas Driver’s License Features – The label Arkansas and the state nickname are in the top right corner.

Most IDs have the state’s name in the top middle of the card, but Arkansas is placed to the left with its state slogan below it. Neither the word Arkansas or the state nickname overlaps on top of the UV state seal image. A high-quality fake ID creator must position the pictures and images, so one area doesn’t look too crowded or empty. When every feature of the ID is placed precisely where it should go, it can’t be distinguished from the real state-issued ID.

UV state seal and state flag – Overlapping the main photo are two UV images. The state seal is above the photo, and the state flag is to the right, but on its side. It’s hard to notice these symbols, but they do glow a rainbow color when exposed to light. If a bartender or cop were to shine a light on a cheaply made ID, they might see that the card is fake because these UV images are sometimes left out.

“Please don’t litter” image on the back of the card. – On the back of the ID in the right-hand corner, you will see a picture with the words “please don’t litter”. This is not a UV image. It is a regular image. Next to it will be a rectangle with the word “shine” at the top. Fake ID makers might just print black squares in place of these images. However, they are a unique part of the ID, and someone will notice if their design is changed.

INVERTED CARD PHOTO ON BACK – The new Arkansas ID released in 2020 has an inverted dupe of actual driver’s license photo on the back. The color is greyscale and uses no background.

If you thought nothing goes on in Arkansas, then you would be discrediting the party life of the entire state! Arkansas has been through some wild times in history, and its future looks just as crazy.

The law may always be in your way, but with a little forward-thinking, you’ll be able to outsmart it! Do you want to miss out on once-in-a-lifetime events just because you’re not the right age? We didn’t think so! If you buy an Arkansas ID from IDTop, you’ll be able to visit great places like George’s Majestic Lounge in Fayetteville.

When a person shines a blacklight on the state ID, fourteen outlines of Arkansas state should reveal themselves. UV images are often left out because you can’t really see them unless you have a light.

This ID has many regular and UV images throughout the card. The placement of every single picture must be perfect because it could crowd a section or corner of the card. Checking for misplaced images is the most obvious way to see if an ID is fake.

Microprinting or printing that is undetectable to the human eye is now in widespread use as the state uses it to create more secure IDs. There are no counterfeiters that can afford this type of technology. You are only able to find micro printing with the use of a scanner, but it is the most effective way to know if an ID is fake.

What are Arkansas Laws Regarding Fake IDs?

When it comes time for a university to receive their fall students, there is an increase in police presence around bars and clubs nearby. In Fayetteville, officers organize sting operations to find fake ID users. Officers can find over 30 fakes IDs at a single house party.

They even carry ID scanners and magnifying glasses with them so they can even detect high-quality fakes. When a person is caught, if they have their real ID or license on them, it will be confiscated. The person will not be arrested, though.

Although fake IDs are not looked upon fondly by the police or local authorities, if you’re caught possessing a fake ID, the charge would only be a misdemeanor. You have to pay a fine of up to $1,000, and you could receive up to a year in jail time. Plus, you would have to fulfill any community service orders you received when you are out of jail.

If someone who is under 21 is caught with a fake ID and they were using it to purchase alcohol, they will be charged with a Class B misdemeanor.

This means that they will have their license suspended for 60 days if it is their first time being charged with a crime. If they are caught a second or third time, their license will be suspended for 120 days or a full year. A Class B misdemeanor can land you in jail for up to six months, and you must pay a fine of $2,000.

If you use your fake ID to commit a financial crime, like fraud or opening credit lines, you can be charged with a Class C felony, which is identity fraud. For this, you can be sentenced to 3 to 10 years in prison and up to $25,000 in fines.

Part of a group order. We received our fakes with a free duplicate. Delivered in a discreet box to our dorm. 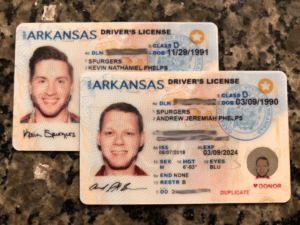 Kenzo AbeFortsmith, Arkansas.
I lost my real license and had to wait for DMV to issue a new one. Instead, I used IDTOP to send me a temporary fake to get my payment. 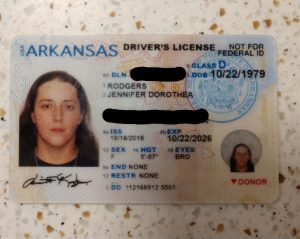 Be the first to review “Arkansas Fake ID” Cancel reply