Utah might be full of Mormons, but that just means fewer people can crowd up the bars and pubs. In the past five years, the selection of craft brews and cocktail hours has grown in the state. But unless you’re in a large city, don’t expect too much from the local nightlife. Whenever you’re willing to travel for a better party scene, head to Salt Lake City or the city of Ogden.

Buy a Scannable fake Utah ID from IDTop & enter the world of eclectic wall decor and dozens of beers on tap, you can drink the day away while you’re waiting for the clubs open.

RAISED DOB – If you run your fingers over the date of birth on the front of the card, you would be able to feel the letters and numbers. The part below the ink is raised and creates ridges in the plastic.

MULTI-FEATURE SECURITY – The background of the Utah Real ID is filled with color. The colors used are blue, yellow, purple, red, green, and brown, and together, which create the many features and designs on the background. There are wavy squares that make a brick formation, guilloche lacing, the capitol building, and a rock formation. Throughout the background, there are also microprintings.

For the Utah Real ID, the ghost image is just a bust of the cardholder. It is in black and white, but there is no background. You can also see the background design through it.

UV GRAPHICS – Across the front of the Utah ID card, there is a large UV design of a spiral line. There is a wavy line above the spiral into thinner wavy lines below the spiral.

Laser Printing – On the right side of the card, there is a perforated design of a tiny beehive. If you place a light behind the card, the light will shine through the beehive’s holes. On the front of the card, there are two spirals on the bottom right corner and in the top left corner. These spirals are made from UV ink, and blue waves surround them.

Holographic State Seal Overlaps Photo – As you angle the Utah ID card in certain positions, you will see text spelling out the word Utah, a state seal on top of the ID photo, and an outline of the state of Utah with a star inside. At the top right corner. There is a blue outline of Utah, and inside it is the letters UT and USA in blue. To the left of the outline is the Real ID symbol, which is a gold circle with a star cut out of it. Through the cutout star, you can see the ID background.

Bouncers in the city of Ogden regularly watch out for young people in the downtown area, but our fake Utah IDs are replicated so well that they even pass ID scanners. Once you finish with the doormen, start your night at The City Club. It’s a Beatles themed bar with artistic decor and homestyle food.

How to spot a fake Utah ID

The coloring of the background is off

There are many different colors and designs on the new Utah Real ID. So it will be very obvious if these colors are faded or too bold.

The ghost image has a background

The Utah ghost image is printed black and white, and the background can be seen through it. However, it does not have its own white or colored background.

There is no tactile date of birth

Next to the ghost image should be a date of birth that is tactile. But if the printers cannot make the tactile feature, then it will be at least colored black. But when a bouncer runs their fingers over it and feels nothing, then you’ll probably be asked to leave.

What are Utah Laws Regarding Fake IDs?

In Salt Lake City, expect to run into scanners everywhere you go. Even the worst kind of bars, the kind that is cheap and rundown, have ID scanners. So you need a high-quality fake Utah ID to pass the scanners.

In fact, many places in Utah must have ID scanners if they sell alcohol. This is because of a law in 2010, which made it mandatory to have a liquor license.

So everywhere you go, you will be carded if you look too young and you’re trying to buy alcohol. The law also says that anyone who looks under 35 must have their license scanned.

But the widespread use of ID scanners has backfired in some areas. Clerks, bartenders, and bouncers now rely on the technology, and they don’t know how to spot a fake ID from a real one by sight.

So if a minor or underage adult brings in an ID that passes the ID scanner, but it is fake, they will still be allowed into the bar or club or allowed to purchase alcohol.

Impressive communication before ordering my Utah Driver’s license. They helped me create a license number & address.

Jacob WhitneySalt Lake City, UT.
Just scanned my ID with a BCS application & it scans with the same credentials embedded on the front of Utah ID. 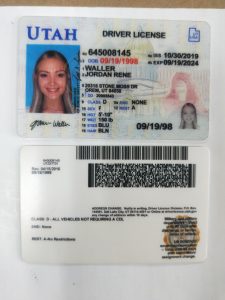