Never challenge a Wisconsinite to a drinking game because it will be the last thing you remember. Wisconsinites know how to drink, and they know their way around bars. Alcohol and drinking are a part of everyday life in Wisconsin, and it’s a big part of football.

Buy a Scannable fake Wisconsin ID from IDTop & put on your best outfits to hang out or give tailgating parties in anticipation of the big game.

Iconic Wisconsin Symbols – There are many colorful designs on the Wisconsin background, like the hay behind the photo ID. There are also maple leaves in the bottom right-hand corner, a state capitol building in the middle of the card, and a side view of the Wisconsin flag that is blue and yellow in color.

CURLED WISCONSIN LICENSE CREDENTIALS – The word Wisconsin is engraved and raised on the backside of the card near the bottom right corner. It is engraved over the blue background design. There are other tactile credentials such as DOB & Expiry. You can feel the raised printing with the tip of your fingers.

BACK WISCONSIN SEAL – There is a large yellow state seal surrounded by blue colors on the back. It does not touch the 1D or 2D barcodes, but it does reach out to the sides. On the left-hand side, there is a second printed ghost image in black and white with a background.

Special Wisconsin Driver’s License Features – The label Wisconsin and the state nickname are in the top right corner.

Over the main ID photo, there is the state seal Wisconsin, the year 1848, and W printed in UV ink. There is also a UV ghost image overlapping over the printed ghost image.

Engraved Driver’s License Number – The Wisconsin Real ID license number has 14 characters. The first character is a letter, while the other 13 characters are numbers. Every four numbers, there is a separation dash, which leaves the license number in a pattern of 4 – 4 – 4 – 2.

Wisconsin ID Ghost Window – On the right side of the card is a small ghost image of the ID photo. It is Transparent, but it has an oval-shaped background that is white. Underneath the image is a scrolling text that says the year of birth and the cardholder’s name.

WISCONSIN ID BANNER – There is no solid banner at the top of the card. Instead, it is just an extension of the yellow and blue background. Wisconsin is in blue letters in the middle, and the USA is above it. Next to the USA is a green leaf. In the left corner, it will either say driver’s license regular in black or identification card in red.

Bartenders and bouncers in Milwaukee have the right to confiscate any fake IDs they find, but our fake Wisconsin IDs are practically replicas, so you’ll always get them back. Once you get past the bouncer, you can immerse yourself in lights, skin, and smoke when you go to the Lucid light Lounge.

How to spot a fake Wisconsin ID

The flag in the background design is printed in light blue.

The Wisconsin state flag must be printed in dark blue ink. Sometimes the ink will not appear on the card in the correct color, and it will be too light. This means that the printer was not able to dye the card with the correct color.

There are no tactical features

Only specialized printers can read tactile features; it is a common feature to leave out in order to save on money. For example, the name Wisconsin on the back of the card is tactile, but if you brush your thumb over a poorly made fake card, it will be smooth.

When a state-issued ID has many overlapping features, the overlap itself is a security measure. Cards that are made without state-issued printers won’t be able to hold the hologram or UV ink or perforation without damaging the card or making the card thicker in certain areas.

What are Wisconsin Laws Regarding Fake IDs?

Last year, many businesses and stores that have liquor licenses in Milwaukee gathered together & began using an ID scanning system that not only finds fake IDs but saves them for future reference.

It can also save the information of the person who had the card. Everyone who is a part of this system is free to reference any information stored in the database and find fake ID users who never stepped into their own establishment.

They call it the Electronic Bouncer, and it is primarily used to find underage drinkers, fake IDs, and customers who have a problem with theft or violence.

Some critics are arguing that software is like a dystopian invention. Places that you’ve never gone to can keep you from making purchases or being a guest.

Users respond by saying that if they’re not a minor who uses fake IDs, you don’t steal, and you don’t get violent, then they have nothing to worry about. The makers of the software say that all data is internal and does not transfer to an outside source.

With bouncer and bartender jobs on the line as well as liquor licenses, that can bring in revenue of $10,000 a month; there’s a lot riding on preventing minors from consuming alcohol. But the Electronic Bouncer is finally making it easier.

My package was received in 8 total days with standard shipping. Well within a time-frame advertised on their website. 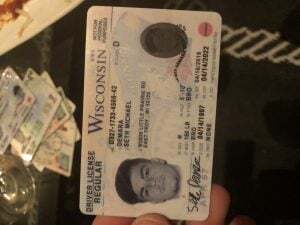 Tony BaloneyAppleton, Wisconsin.
Generating information with IDTop’s automated fake ID information system was a cake walk. Do not waste your money on other vendors. 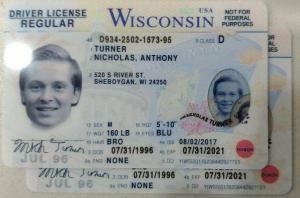 Be the first to review “Wisconsin Fake ID” Cancel reply